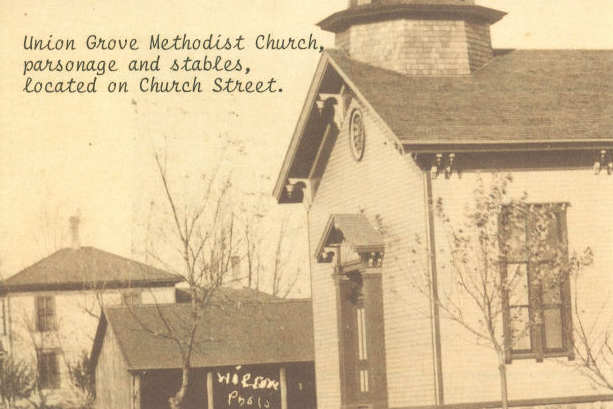 In 1853, a group of people in Union Grove organized a Methodist Society.  Services were held in the school house at the sound end of the village.  They built their own church in 1861.  It was a typical New England box-like structure with a bell tower and a spire.  It is the oldest church building in Union Grove.

The Sunday school library was started in 1871 and continued to be enlarged until 1922.  At this time, the church offered this library to the Village of Union Grove.  The offer was accepted and it became a nucleus for the first public library established in Union Grove.  It was located in the Kemp building at 1114 Main Street.  This building is presently occupied by the Napoli Italian Restaurant.

The church was not only a place of worship, but also the center of most social activities.  In the winter, horse drawn sleigh rides were great fun.  Everyone looked forward to the Sunday School picnic at Eagle Lake in the summer.   Children’s Day was a very grand affair. At this event, people brought plants, flowers and sometimes even singing canaries for decoration.

The building was moved to its present site (the corner of 12th and State Street) in 1925. Parishioners decided to move the church because it was quite close to the railroad tracks and the increasing amount of train traffic was very annoying during worship services. Additional room was also need for the Sunday School.  The moving was done by horse and manpower.  The church was placed in its present location on a prepared basement foundation, with the addition of the main entrance and east room.

The Methodist congregation continued to grow and to serve the community through the 1930’s, 40’s and 50’s.  In the mid 1960’s, the Sunday School once again needed more room. The education building was built to the west of the church in 1966.

Since 1974, the church has provided space in the education building for a child care center. On April 1, 1977, the church became owner of the center, which now operates as the Bright and Beautiful Christian Child Care Center, a non-profit organization.  It is part of the Union Grove Methodist’s church’s mission to provide high quality Christian child care to the community.

Over all these years from 1853 through the present our church has had an impact on this community and hopefully the world.  We truly reached out “to make disciples” and we continue to reach out with our Planned Acts of Kindness, Mission trips, Quilters & Knitters, Coffee House, Youth Group, Ministries and other programs.

With everyone’s prayers and support, these programs will continue and grow.